​he will get you 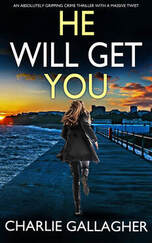 THE MOST GRIPPING CRIME THRILLER OF 2020. FROM AN INTERNATIONALLY BEST-SELLING AUTHOR.

A KILLER WHO LOVES TO WATCH THE RESULTS OF THE HAVOC HE WREAKS.

Lance Askew is a career serial killer. He lives for it.

THE FIRST VICTIM
Alice Oxley runs her own café. An older man has become a regular over the last month. He likes to people watch. He doesn’t say much.

When he does speak. It comes from nowhere, he waits until she is very close: ”Your son is dead. I killed him.”

Her boyfriend is dead too. He says he left them under the photo on the stairs, the one where they’re all smiling together.

He drinks in her reaction then breaks the spell: “Go!” he rasps.

She runs home to see what he has done.

THE SECOND VICTIM
Michelle Rice pushes open her garden gate. It makes a squealing sound – it always has. It is how Lance Askew knows she’s home. He can barely contain himself. He is waiting for her.

Soon she will see what he has done.

A THIRD VICTIM IS IDENTIFIED.
Another family are about to have their lives ruined.

Maddie Ives and Harry Blaker are the detectives who must stop this killer. And he is far from finished.

ONE OF THEIR OWN IS THE NEXT TARGET

He Will Get You - the brand new thriller from Charlie Gallagher.
shop now